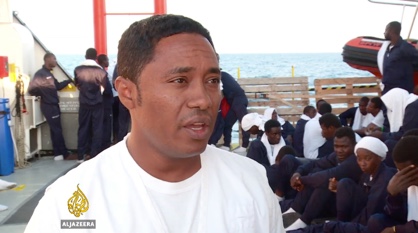 After seeking asylum in the UK from Eritrea 15 years ago, Amani Teklahaimanot now helps refugees on their way to Europe.

A volunteer-rescuer trying to make African refugees safer, Teklahaimanot understands his passengers better than most.

Fifteen years ago, Teklahaimanot was in the same situation as those he is trying to help.

”I came through the same journey, and I really know how these people face a lot of hardship in their journey,” he told Al Jazeera. ”It’s really a good opportunity to help these helpless people, because I was in the same situation.”

Amani escaped poverty and repression in Eritrea in 2001.

His journey took him through Sudan and the Libyan desert before he tried to cross the Mediterranean on a rubber dinghy to reach Europe.

The dinghy he travelled on failed, however, and he had to return to Libya. Then, in another dangerous journey on a wooden boat, Amani was able to finally reach Italy along with dozens of other Eritrean asylum seekers.

He now remembers with a smile what was back then a difficult situation.

”So we just got on any train in Italy,” he said. ”They [conductors] asked us for a ticket but nobody had a tickets, so we had to get off the train and wait for another one. Anyway, after hours of travelling we reached Rome. For about a month, we just lived on the streets.”

Teklahaimanot is a British citizen now. He lives and works in Sweden with his family and is preparing for a university degree.

As a volunteer, he mediates and translates between refugees and rescuers.

”I really feel sorry to see these people risk their lives, but I can understand them,” he said. ”As an Eritrean, I would take the risk because in my country, there is no future at all. I took a risk when I chose between whether to die or have a good future.”

So far this year, at least 3,654 refugees have died while trying to reach Europe on perilous journeys. In the same period last year, 3,138 refugees died en route to Europe.

”My message is to tell refugees that it’s an extremely risky journey. A lot of lives are lost in the Sahara desert and Mediterranean sea. They must be aware how risky it is and to try to seek other ways,” said Teklahaimanot.

As European countries tighten restrictions on refugees, Teklahaimanot feels sad that the welcome he had during his asylum process 15 years ago may not be awaiting new arrivals.

Eritrean students protest against the government in Asmara 20171031

Nice words do not help – increase pressure on Eritrea

ልዋም ንባብ! - okt 2, 2017
0
Five European Parliamentarians: Harder pressures are the only way to get answers from the dictatorship DEBATE. Just today, September 29th, it is 5 850 days...