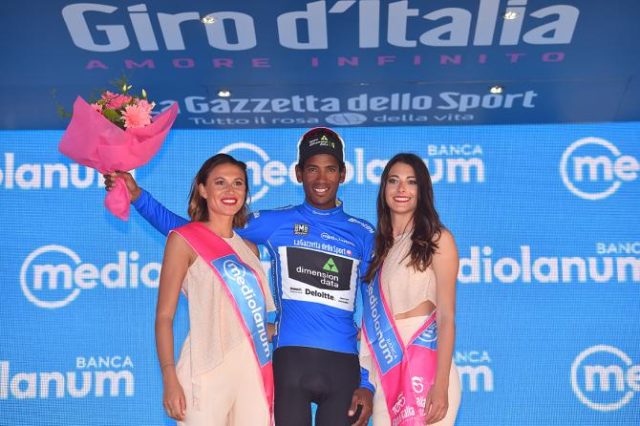 Part of a five-man move that disintegrated near the top of the day’s toughest climb, the Genna Silena, and with the bunch snapping at their heels, Teklehaimanot’s attack has netted the Eritrean the lead in the Giro’s mountain classification.

It was a smartly calculated move that had fans recalling his first-week lead in the same king of the mountains ranking in the Tour de France in 2015, a classification he has now won outright twice in the Critérium du Dauphiné. Thanks to the combined effects of his breakaways on stages 1 and 2, Teklehaimanot is now leading an almost bewilderingly high number of minor Giro d’Italia classifications as well, ranging from the intermediate sprints and the combativity classifications to the ’Fuga Pinarello’, for the rider who has spent longest off the front of the bunch.

Haas then sped away on the high-speed descent towards the finish town of Tortolì, briefly opening up a gap of around 20 seconds as Davide Martinelli (Quick-Step Floors) bridged across, but then refused to collaborate. The move came to naught a few kilometres later as Bahrain-Merida opened up the collective throttle on the downhill, but Dimension Data still secured two top ten spots in the bunch sprint, with former Vuelta a España stage winner Kristian Sbaragli taking fifth, with Ryan Gibbons also in seventh.

”Daniel Teklehaimanot is a superstar for us, he’s probably the second most famous man in Eritrea after the guy [Zersenay Tadese] who almost cracked the two hour record in the marathon last night,” Haas said as he pedalled towards the Team Dimension Data team bus.

”We’re super-proud of him and it’s really helping us put our campaign out there, we’re trying to get 100 people on bikes for Qhubeka at the Giro so that’s great. In the sprint, Kristian and Ryan did well, too.”

Haas’ own dig over the top of the second category Genna Silana, 47 kilometres from the finish in Tortolì, briefly looked promising even after Martinelli got across, but finally it was quickly hoovered up.

”They were going to ride for me today, I was hoping and expecting it to be much harder than it was,” Haas reflected. ”It was arduous today but there was nothing that caused a selection, because the break went so slow. At the same time there was a headwind on that final climb.”

Our original plan was to pile on the pressure and try to crack everyone on the climb, but there was just no point. Over the top I just felt it was a strange moment we’d caught the break, sometimes you’ve got to test the waters, try and create an opportunity.”

”Unfortunately the guy from Quick Step joined, and I thought, ok this could be something, but he said, ’no I’m sitting on.’ I understand you’re riding like that for [Quick Step sprinter Fernando] Gaviria, I don’t understand why you’d not try to fight to create an opportunity, it’s easier to win from two than from a bunch sprint.

”Still I’m very proud of the team’s effort, I don’t think we did anything out of step, it’s a great day for Daniel to be in the [king of the mountains] jersey.”

Giro d’Italia: Teklehaimanot takes king of the mountains jersey on active day for Dimension Data
Haas tries a late attack and Sbaragli and Gibbons finish in top 10
May 06, 2017 9:18pm 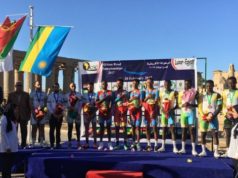 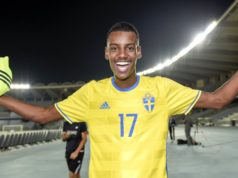 UN calls on African Union to respond to Eritrea violations 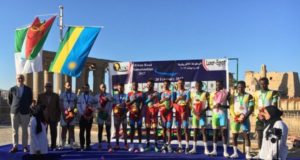 ልዋም ንባብ! - feb 15, 2017
0
In the popular resort of Luxor are unfolding African Championships road cycling. Today it was the turn of the clock at the elite teams...