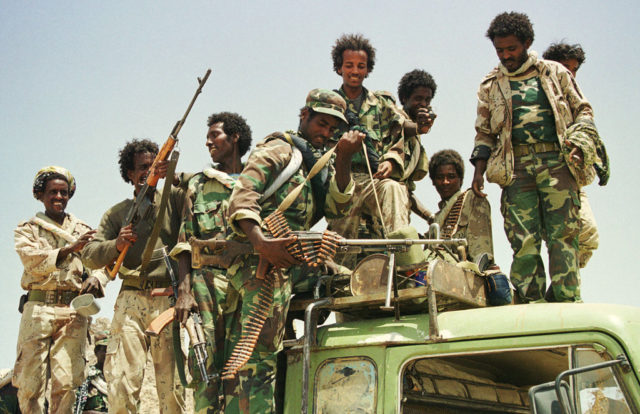 President Trump understands the danger posed by Iran and the necessity of confronting that mullah-controlled Islamic country. He has cited the nefarious role played by the Houthis—a Shiite terrorist group operating in Yemen that is a major proxy of Tehran. The Houthis constitute a major threat to the Arabian Peninsula and the entire Red Sea region.

As such, they greatly concern Egypt and Israel. Both countries, of course, are key U.S. allies.

A coalition of Saudi Arabia and moderate Gulf states is fighting a protracted, intensive war against the Houthis. They hold a major frontline in the battle against Islamist terrorism.

A key partner in this coalition is Eritrea, a country with a long track record of fighting terrorism, but which has been shunned by the United States for more than a decade. Eritrea has provided the coalition with its territory along the Red Sea, and its facilities, including the crucial port of Assab.

Multiple operations have been launched from Eritrean soil. Eritrean troops reportedly are involved in military operations inside Yemen. Saudi Arabia and the UAE have indicated they welcome and value Eritrea’s participation. Egypt and Eritrea have greatly strengthened their already close ties in recent months, and Israel has cooperated with Eritrea for years.

Over most of Eritrea’s history, America’s posture toward the country has been puzzling and self-defeating. Cold War strategies may explain why the United States did not support the Eritrean thirty-year independence struggle, which began in the early 1960s.

Early on, Eritrean rebels were fighting against Emperor Haile Selassie of Ethiopia, an ally of the United States. The reason for our hostility was clear. But the United States maintained its position through the 1970s and 1980s, when Ethiopia was ruled by a Stalinist dictatorship who was the USSR’s main ally in Africa. Even then, the United States kept its distance from Eritrea despite its strategic location.

In 1991, Eritrea won its freedom, without significant outside help. Their rebel allies in Ethiopia took power in Addis Ababa, and for seven years the two countries cooperated and coexisted.

In 1998, the two countries—not only neighbors, but ethnic relatives—fought a bloody and senseless war, ostensibly over border and currency issues. More than one hundred thousand were killed.

Although there are no current hostilities, the border is still not demarcated (Ethiopia refused to accept the rulings of a commission whose rulings both sides had agreed would be “final and binding”), and there is a continued tense standoff between the two armies.

Throughout all this the United States has pragmatically favored Ethiopia (population one hundred million) over Eritrea (population 4.5 million). John Bolton complained in his memoirs that when he was UN ambassador, he wanted to implement international law and require Ethiopia to abide by the decision by the Ethiopian-Eritrean border commission. To his astonishment, the State Department blocked his well-intentioned attempt.

In fact, the State Department’s attitude towards Eritrea has been singularly and unfailingly negative. Since (and even before) their liberation, the Eritreans have struck a unique and independent path. They eschew foreign aid and foreign debt. Eritrea president Isaias Afwerki lives modestly, mixes freely with his people, and rejects any hint of a personality cult. He is no liberal reformer, nor is he an oppressive gangster, of which there are too many in Africa.

Afwerki criticized the UN and the Organization of African Union for duplicity, hypocrisy and ineffectiveness. These behaviors, so different from the rest of Africa, struck many raw nerves with professional foreign-service officers.

Not surprisingly, senior Pentagon officials and high-ranking military officers have long desired close engagement with Eritrea. Defense Secretary Donald Rumsfeld, after visiting the Eritrean capital of Asmara in 2002, spoke glowingly of Eritrea’s role in fighting terrorism and the benefits to the United States of working with Eritrea.

Rumsfeld praised Eritrea for its fight against terrorism, saying the United States “can learn much about combatting terror” from Eritrea.

Gen. Anthony Zinni and Gen. Tommy Franks, who got to know Eritrea’s military leaders fifteen years ago, praised them as well. It is a tragedy for American interests and for the people of Eritrea that the State Department succeeded in torpedoing, for so many years, what could and should have been a close and productive collaboration.

The culmination of the harsh vendetta against Eritrea came in 2009, when UN Ambassador Susan Rice succeeded in steamrolling the Security Council into sanctions against Eritrea under the flimsiest of pretexts, accusing Eritrea of supporting terrorists in Somalia.

In fact, both Eritrea and Ethiopia were engaged in a proxy war against each other, and supported militias in Somalia and on each other’s territory aimed at undermining each other.

Wikileaks cables show the United States knew this was so and that any assistance Eritrea was giving to bad groups in Somalia was insignificant. Regardless, the UN Eritrea and Somalia Monitoring Group continues to report that Eritrea is not supplying any assistance to terrorists in Somalia.

Still, the sanctions on Eritrea remain in place. Only the United States, during the Obama administration, supported maintaining the sanctions.

In addition to the Somalia issue, Eritrea faces a host of significant human-rights concerns. Its government should certainly be encouraged to enact reforms allowing freedom of the press, democracy and other universally recognized rights. It is inarguably an authoritarian state. It may be easier to achieve progress through constructive engagement rather than hostile isolation.

Shortcomings recognized, it is also true that in Eritrea Muslims and Christians live in harmony. The Eritrean government refuses to allow extremist Wahhabi funding of mosques and schools that poison young minds. There is no ethnic violence among the nine different people that make up Eritrea’s population.

Little crime or drugs infest Asmara or elsewhere in the country; corruption is low; progress in health care—including reducing malaria, Tuberculosis, maternal and infant mortality, measles and other diseases—is among the best in the world, according to the WHO. The rate of AIDS is minuscule, among the lowest in Africa.

These are significant achievements and would be the envy of most, if not all, African countries. These factors should be looked at as well when assessing human rights. Yet, to Eritrea’s harsh critics, none of this matters.

President Trump said during his visit to Saudi Arabia that America needs to reach out to countries who “share the aim of stamping out extremism.” Afwerki has made it clear for years that his country wants to work with us in doing just that. The Eritreans have proven their mettle, having fought against, and defeated, Islamist terrorists sponsored by Sudan since Eritrea’s independence. Their strategic location on the Red Sea makes them an invaluable ally.

What is necessary now is for the Trump administration to implement its own logical policy, by overcoming the bureaucratic inertia and debris of the previous, failed Obama policy, and actively engaging with Eritrea. To quote again from President Trump’s remarks in Riyadh: “We must seek partners, not perfection—and to make allies of all who share our goals.”

Fortunately, the tide of opinion in policy circles is finally turning. Former Assistant Secretary of State for Africa Herman Cohen not long ago urged that Eritrea be brought in from the cold, starting a much-needed debate and discussion, and the Atlantic Council has called for the same. The policy of isolating Eritrea has been a disaster; sanctions are unjustified and should be lifted; and a serious strategic dialogue should begin with Eritrea.

Rep. Dana Rohrabacher, chairman of the House Foreign Affairs Subcommittee on Europe, Eurasia, and Emerging Threats, represents California’s forty-eighth district.
Image: Jubilant Eritrean troops show off their weapons after recapturing the western Eritrean town of Tesseney from Ethiopian forces June 6. The Eritrean government said on Tuesday it had recaptured the town from Ethiopian forces after a day-long battle which forced thousands more civilians from their homes, adding to the region’s humanitarian crisis.

By: The National Interest

From Arizona to Eritrea, a deadly start for 2017 for immigrants: IOM

We need to send Eritrea to the International Criminal Court

ልዋም ንባብ! - okt 18, 2016
0
Eight Eritrean women enslaved by IS have turned themselves in to the Misrata-led forces of Al-Bunyan Al-Marsoos in Sirte, sources reported. The sources indicated that...