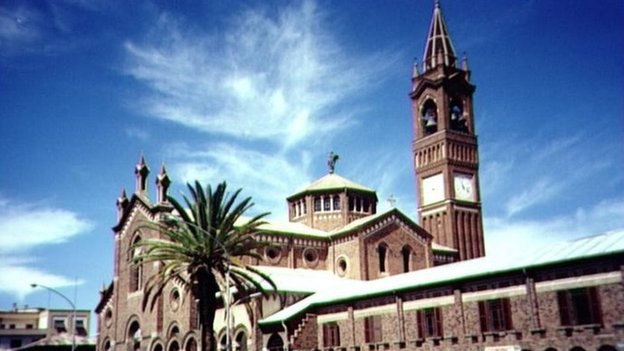 The Eritrean government has arrested nearly 100 Christians this month as part of the massive crackdown against unregistered churches.

According to World Watch Monitor, the arrests took place in the days leading up to Eritrea’s Independence Day on May 24.

On May 9, a total of 10 Christians were arrested from a home in Ginda, north-east of Asmara, for holding secret meetings there. Church members have resorted to holding secret meetings in people’s houses since a law was passed in 2002, banning churches other than the Orthodox, Catholic and Evangelical Lutheran Churches, and also Sunni Islam.

On May 17, more than 35 Christians were arrested from their homes in Adi Quala, a market town some 16 miles (25 kilometers) from the Ethiopian border in the country’s Southern Region.

The arrests reportedly took place after the officials went door-to-door on May 15 and asked household members to indicate whether they were Muslim, Jehovah’s Witnesses, or members of the Orthodox Church, Lutheran Church, Catholic Church or Pentecostal Church. The next day, security officers came to arrest all those who indicated they were Pentecostals.

On May 24, the authorities reportedly arrested 49 Evangelicals outside the capital Asmara, during a post-wedding celebration. The newly-weds, who were in their late 20s, were among those who were arrested.

The crackdown on Christians is not limited to members of unauthorized churches. In 2007, the authorities removed the legitimate patriarch of the Eritrean Orthodox Church, Abune Antonios, from office and installed Bishop Dioskoros of Mendefera in his place. The move has been seen as a violation of the Church’s constitution since the patriarch is traditionally appointed by Egypt’s Coptic Orthodox Pope, for life.

Antonios had come under fire from the government beginning 2006 when he refused to excommunicate 3,000 members of the Medhane Alem Orthodox Sunday School revival movement and called for the release of imprisoned Christians accused of treason. The government stripped him of his title in 2007, but he is still recognized as canonical patriarch by the Eritrean Churches in Diaspora and by Oriental Orthodox Churches.

The 89-year-old patriarch has been held under house arrest since 2007, but the location of his incarceration remains unknown. His family and friends are concerned that he is not receiving adequate medical treatment as he is suffering from diabetes.

”He remains incommunicado under house arrest despite reports emanating from Eritrea during August 2016 that indicated his release was imminent,” said advocacy group Christian Solidarity Worldwide (CSW) in a statement.

CSW Chief Executive Mervyn Thomas called for the patriarch’s immediate and unconditional release as well as his reinstatement.

”We also to urge the international community not only to express concern at the patriarch’s plight, but to also remind the Eritrean authorities that his removal constituted an unlawful interference in church affairs, and to request his immediate release and return to office,” he added.

By: The Christian Times