There are grave concerns for the wellbeing of an elderly Orthodox Church leader in Eritrea held under house arrest for ten years.

The weekend marked a decade since His Holiness Abune Antonios, the legitimate Patriarch of the Eritrean Orthodox (Tewahdo) Church was evicted from his official residence.

The 89 year old’s removal from his position followed his opposition to treatment of Medhanie Alem Church in the capital, Asmara. It is not known where he is being held under house arrest.

He objected to requests to close the church and excommunicate 3,000 of its members, and the detention of three of its Orthodox priests in November 2004.

Mervyn Thomas went on to say: ”The government has stripped him systematically of his liberty and of every possession related to his position.

”However, it failed strip him of his dignity and lacks the capacity to take away his calling. Patriarch Antonios remains the legitimate patriarch of the Eritrean Orthodox Church and has not been forgotten.

”CSW continues to call for his immediate and unconditional release and reinstatement. We also to urge the international community not only to express concern at the patriarch’s plight, but to also remind the Eritrean authorities that his removal constituted an unlawful interference in church affairs, and to request his immediate release and return to office.”

The United States Commission on International Religious Freedom has also campaigned for the release of Patriarch Antonios, who it considers a prisoner ”of conscience”. 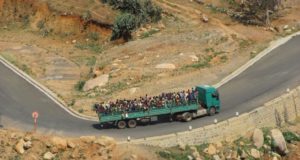 Ibrahim Was a Slave on the Eritrea Border When He Saw...

ልዋም ንባብ! - aug 30, 2017
0
It's a long, bloody road from conscription in Eritrea to freedom in America “It really is beautiful,” Ibrahim says as he takes a sip of...