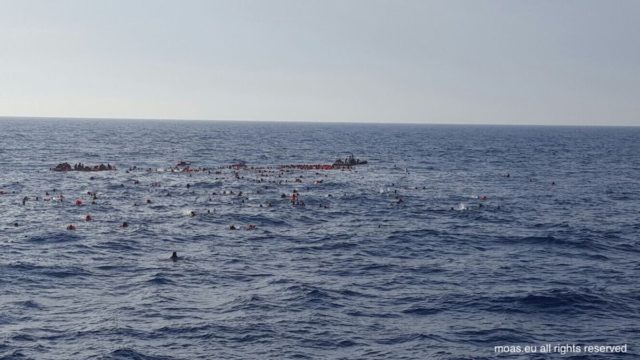 Another tragedy in the Mediterranean, about 200 migrants trying to cross the sea fell overboard earlier this week. They found themselves in rough water, and 34 of them – many of them children – drowned. It’s part of the ongoing crisis of people fleeing West Africa by boat, mostly from Libya.

In the past week alone, more than 7,000 migrants have been rescued off Libya’s coast, but the job of saving those migrants has gotten more complicated. The humanitarian group Doctors Without Borders says the Libyan coast guard is interfering.

They charged that earlier in the week during a rescue operation Tuesday, the Libyan coast guard fired weapons and tried to rob the migrants. The Libyan coast guard denies this charge. Marcela Kreey is with Doctors Without Borders, and she joins us from the search and rescue ship Aquarius which has just come into port in Salerno, Italy. Thanks so much for being with us, Marcela.

MARTIN: Can you tell us what happened on Tuesday in that rescue? How did the Libyan coast guard get involved?

KREEY: So we are used to seeing some small boats of Libyan coast guard around. But on that particular Tuesday, there was a larger vessel around. We were engaged in multiple rescues. We had different small boats in distress around our ship, the Aquarius. And we had taken one particular rubber boat. We had given life jackets to the hundred-plus people that were jammed onto that rubber boat and were engaged in trying to rescue another vessel – another rubber boat – that was in bigger distress.

In the meantime, the Libyan coast guard, two of the people descended onto the rubber boat. They were wearing military uniforms, and one of them was carrying a Kalashnikov. When they were on the rubber boats, we could see from the ship that they were – the people were trying to stay away from them, and they were walking around on the rubber boats as best they could because it was quite full of people. At one point we could see that the man with the Kalashnikov pointed it up in the air and started shooting multiple times.

KREEY: Later, we spoke to the people that were on the rubber boat, and they reported to us that they had been intimidated and any valuables that they had on them had been taken off them.

MARTIN: Have you had problems like this in the past with the Libyan officials?

KREEY: This is really a first time for us. Like I said, we sometimes have Libyan coast guard vessels around, but this is the first time they’ve actively interfered in an ongoing rescue. At one point, we also saw they started the engine of the rubber boat and started driving the boats in the direction of Libya.

And at that point, we could see that people who had already been intimidated by the shooting started jumping off the boat. The good thing is that since they were already wearing life jackets, they were floating, and our rescue boats managed to get them to the Aquarius safely. But if they had not been wearing life jackets, it would have definitely turned into a tragedy.

MARTIN: Can you just remind us of the backstory here? Who are these migrants? What are they fleeing?

KREEY: So people coming from many different countries actually, West Africa for sure but also East Africa, Eritrea. We regularly see people from Bangladesh, even Syria, a lot of different places. Sudan, we see many people from there.

MARTIN: And they’re just fleeing ongoing conflict and desperation in those home countries.

KREEY: We can see – exactly, a lot of conflict and poverty and miserable situations. They often go to Libya not to come to Europe but actually to work in Libya because it’s a big country for labor migration.