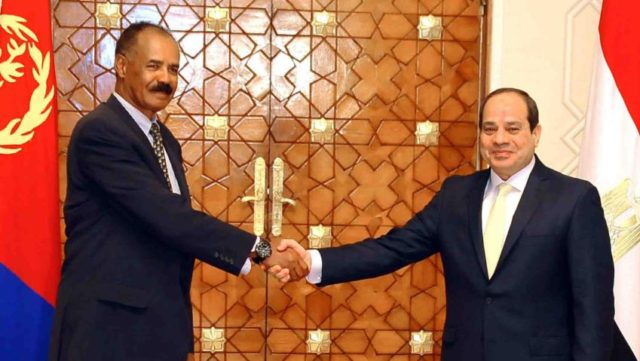 Egypt will open a massive new naval base in Eritrea, after the two countries reportedly signed secret agreements, members of the Eritrean opposition have claimed.
Under the current proposed plans, an estimated 20,000 to 30,000 Egyptian navy crew will be deployed to Nora, a sparsely populated island in the Dakhla peninsula off Eritrea’s coastline.

Spokespersons for the Egyptian government did not respond to requests for comment.

The agreement was made during an Egyptian visit to Asmara last week, but it was possibly also discussed during a summit meeting in November.

Questions remain over the viability of the project however, as Nora island is mostly desolate and the project will require billions of dollars in infrastructure.

A 2011 development research project by the European Commission found that an expensive desalination plant was needed on the island in order to provide safe, clean drinking water to the island’s 66 inhabitants.

The reported plans have angered Addis Ababa, a shared regional foe for both Egypt over recent Nile-related projects, and Eritrea.

Redda Mulgeta, a member of Ethiopia’s ruling Peoples Republican Democratic Front (EPRDF), told the Sudan Tribune that the reason behind the new naval project was clear.

”The Egyptian leaders’ motive to have a military base in the soil of rival Eritrea is to sabotage the construction of Ethiopia’s mega dam project by supporting Eritrea sponsored anti-Ethiopian elements and the al-Qaeda-allied Somali militant group,” Mulgeta said, referring to the Somali Islamist rebel group, al-Shabaab.

Egypt’s President Sisi met with Eritrea’s Isaias Afwerki in Cairo in December to discuss a joined up response to Ethiopia’s new hydropower dam on the river Nile, close to its source in the Ethiopian highlands.

Egypt has long campaigned against this dam, due to concerns over a decreased water flow and its effects on Egypt’s agriculture.

Addis Ababa has accused Eritrea and Egypt of fueling discord in Ethiopia with their support for a 2016 wave of protests that unsettled the country’s economy.

Eritrea is also currently leasing out the port town Assab to the United Arab Emirates for a thirty-year period. The UAE is using the Port and airfield in the Saudi-led coalition’s fight against Yemen’s Houthi rebels.

There has been a large military build-up in the Red Sea and off the Horn of Africa in recent years – due in part to Iran’s accelerated naval program and search for foreign naval bases.

Other countries that have increased their military might in the region include Saudi Arabia and Turkey, which recently opened its largest ever military centre abroad in Somalia. 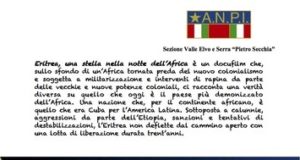