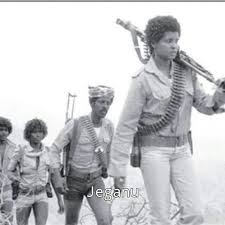 Our Veterans were educated, professionals, farmers and fishermen. They were women and men alike. They were soft spoken and had security, but valued a free Eritrea more. They stood tall, their beliefs unwavering. They promised their people to die but never would let occupation last for eternity.

They gave all of us a free Eritrea.

No matter how much we hear about our history from each of our Veterans and our books, it will never be enough to explain their reliance, their will to protect us. We take a free Eritrea for granted now, but we should not. And above all insults towards our Veterans should stop as a matter of honor. Of gratitude. Let us remember the price they paid.

For, we all joined in the fight. The breastfeeding mother that had to hide from bombs. The grandmother insulted by the hands of the occupier “searching” her while walking to church. It is an insult to the fathers that had to bow their head while “searched” for weapons in their private parts. The young woman with tears in her eyes when the plainclothes Ethiopian security forced her to have a “meeting”.

We enjoy an Eritrean Independence day thanks to our Veterans who followed all this with pain and avenged all of us. Yes, they avenged the very grandmother of those insulting them today. The daughter of those calling them “bandits” today. If not for our Veterans, widows would be living a life of misery trying to feed a family. The breadwinner being in the field fighting for freedom for her/his people. Eritrean families are close-nit families but help from other members was scares because of the enemy’s rules of law denying all to Eritreans.

When our Veterans came back home, they could not regain their sense of belongings to anyone or anything. Their faces mirrored the foreign Veterans coming back to America from Vietnam. After the euphoria of walking into Asmara and a free country, they stared at the abyss of solitude. Life left them behind in professions and academic skills. They were born warriors, and now they had to face the other side of life.

Those who made it to immigrate, they just picked up the pieces and built a life. Today they hear their own countrymen calling them: “bandits”. The government’s shortcoming in preparing a financial base, honor them with a day called “Eritrean Veterans’ Day” and more make several generations plunge in confusion that reached a point of finger pointing.

Eritrean Veterans crossed minefields by walking on top of them and paying the ultimate price. They faced the horror of gas attacks; they lifted kids’ bodies only to realize that limbs were falling apart. Despite this horror, our Veterans kept their will to honor the dead and gave them a decent burial. They fought battles while starving and yet they found the strength to lift their weapons and defend the grandmother “searched” by the enemy simply because she was going to church. They avenged the Eritrean woman whose belly was open by a knife because her pregnancy was labeled “as the child of a bandit” Our Veterans did all this and more. The more we still have to be told.

War creates causalities on all sides. But it is the duty of our government to provide for our Veterans. To heal the divide. To create unity and respect for those who gave us so much. During the occupation, life was a “make-believe” Our kids were the most scarred. We try – today – to raise them and tell them about the martyrs that paid the utmost price, let it be a father or a mother. This is taking away a huge part of a normal childhood. How are we to explain that the very heroes as their Dad or Mom are today labelled as “bandits” by few? Furthermore, how do we explain that a country like ours ruled by Veterans itself is not honoring or taking the time to create an Eritrean Veterans’ Day to honor our Veterans?

The price they still pay is painful – They are after all, our Veterans – our Pride!

Let us thank them and hold hands to create an Eritrean Veterans’’ Day.

Our own Veterans will ask us to reach out to those that in a state of confusion are insulting them.

That is what Eritrean Veterans are made of.