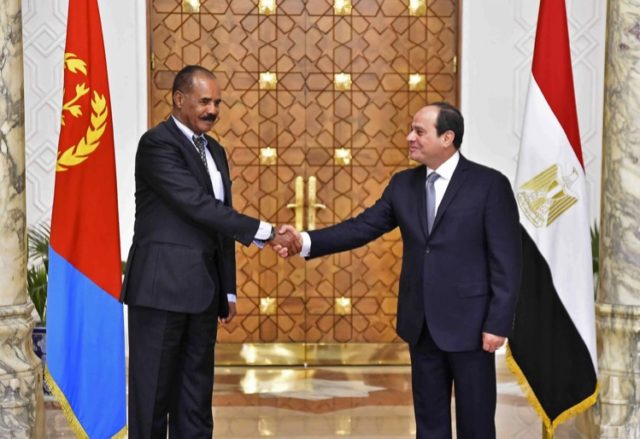 CAIRO — Egypt’s president and his Eritrean counterpart met in Cairo on Monday amid heightened tensions with Sudan and Ethiopia over border disputes and the construction of a massive upstream Nile dam.

Egypt fears the soon-to-be completed dam in Ethiopia could cut into its share of the river, which provides nearly all its freshwater. Eritrea and Ethiopia have long been bitter rivals and went to war in the late 1990s. Ethiopia denies it is cutting into Egypt’s share of the Nile, and has accused Eritrea of training rebels to carry out sabotage attacks on the dam.

Egyptian President Abdel-Fattah el-Sissi hosted Isaias Afwerki at the presidential palace. “The two sides have agreed on continuing intensive cooperation in all issues related to the current situation to support the security and stability in the region,” Egyptian presidency spokesman Bassam Radi said, referring to the Horn of Africa and the Red Sea strait of Bab al-Mandab as two major areas for ensuring stability.

The Qatar-based Al-Jazeera network recently reported that Egypt is deploying troops in Eritrea. The Red Sea Afar Democratic Organization, an Eritrean opposition group, last year claimed that Egypt is building a military base on Eritrea’s Dahlak island and will deploy up to 30,000 Egyptian naval forces.

Egypt’s relations with Sudan, which has lent support to Ethiopia in the Nile dispute, have meanwhile deteriorated.

Sudan recalled its ambassador for consultation last week, and has said a 2016 maritime demarcation agreement between Egypt and Saudi Arabia infringes on its territorial waters. The waters in question are off the coast of an Egyptian-held border region claimed by Sudan. Egypt’s pro-government media have accused Sudan of conspiring against Cairo with Turkey and Qatar.

Ethiopia says the $5 billion dam is essential for its economic development, noting that the vast majority of its 95 million people lack electricity. The dam’s hydroelectric plant will generate over 6,400 megawatts, a massive boost to the country’s current production of 4,000 Megawatts.

Egypt, with a population roughly equal to Ethiopia’s, receives the lion’s share of the Nile’s waters under agreements from 1929 and 1959 that other Nile nations say are unfair and ignore the needs of their own large and growing populations. 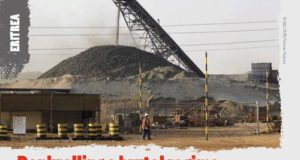