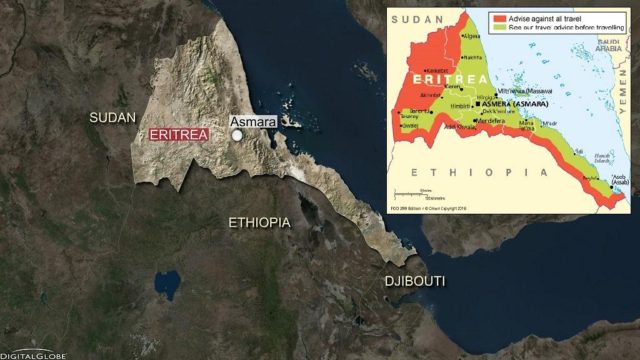 The United Kingdom (U.K.) on Monday (September 4) renewed its travel advisory for Eritrea cautioning its citizens against all travel to borders of the country.

The Foreign and Commonwealth Office (FCO) said nationals should avoid all travel within 25km of Eritrea’s border with Ethiopia and Djibouti – in the case of Ethiopia, due to border tensions dating back to 2008.

The same advice was issued with respect to Sudan with specific mention of Eritrean towns like Tesseney and Barentu all located in the country’s south-west.

Constraints on travel within Eritrea means the British embassy in Asmara is unable to offer consular assistance to British nationals outside Asmara.

A summary of the latest update read as follows: “constraints on travel within Eritrea means the British embassy in Asmara is unable to offer consular assistance to British nationals outside Asmara.

“Entry requirements section (Visas & Foreign currency) – visa applications can take a significant amount of time to process, so you should plan well ahead; you should be aware that you won’t be permitted to take more than 500 nafka (ERN) out of Eritrea.”

The British Embassy, the advisory added, was constrained in assistance that it could offer citizens who were outside of the capital, Asmara. “Six British nationals were provided with consular assistance in Eritrea in 2016,” the statement added.

Dying to Reach Europe: Eritreans in Search of Safety

ልዋም ንባብ! - jun 18, 2017
0
African Union says it will send a 'fact-finding mission' to the countries as tensions between the neighbours mount. The African Union (AU) has urged Djibouti and...