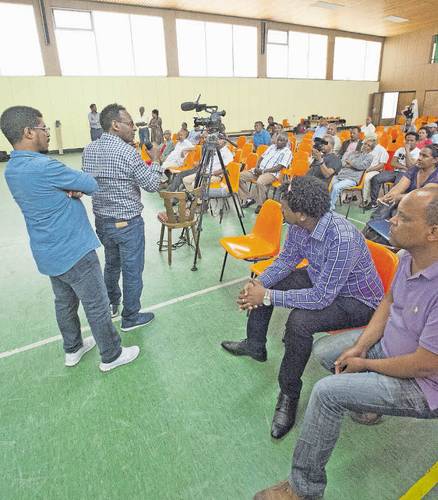 They are fleeing poverty and oppression – and then forced the dictatorial system continue to finance: through a ”construction-control”. Eritreans all over the world pay two percent of their income to the Eritrean government. If they do not, they will get from their country of birth, neither a new passport or official documents. Eritrea is strongly criticized by the United Nations – an infringement of human rights and because the totalitarian regime supported the opposition of neighboring countries, including militant groups like Al Shabab.

Negede Tesfamariam and Tecle Ghebregergis are committed exiled Eritreans. Tesfamariam lives and works in Kaiserslautern, Ghebregergis, in his own words a former liberation fighters, lives in Nidderau near Frankfurt / Main. both have an international congress for Eritreans in the Diaspora organized in the West Palatinate Hochspeyer recently – the first time for Germany. ”Our ultimate goal is the liberation of Eritrea from the current transitional government and the establishing of a democratic constitution,” says Ghebregergis.

A report of the United Nations in May 2016 shows that persist serious human rights violations in Eritrea, which have been documented in previous years. Eritreans are still conscripted to military service of indefinite length on the agenda were arbitrary detentions, torture, disappearances, retaliation for the alleged conduct of family members, discrimination on religious and ethnic grounds, sexual and gender-based violence and killings. In addition, many of the people who were deported by force in the past, permanently missing.

A dominant theme of the Congress in the Palatinate was the ubiquitous even in exile fear of intimidation have been reports of the organization. According to the motto ”I know where your family lives,” would exiled Eritreans who refused to pay two percent levy, threatened with assault. Also expropriations and denials of entry are on the agenda. The long arm of the regime rich even up to Hochspeyer, say the organizers. So unknown had tried before the meeting to obtain information about the organizer in place. ”Our greatest desire is to motivate our fellow citizens and to identify ways to live without fear,” says Tesfamariam who had organized in Geneva in June for thousands exiled Eritreans a demonstration at the Geneva UN headquarters.

A three-day program was offered in Hochspeyer the nearly 300 participants, who came from Germany and other European countries, Canada, New Zealand and Australia. In plenary had been debating the different conceptions of the older and the younger generation, should be how to deal with the regime in Eritrea. Former freedom fighters and 1993. Born in front would thus feel their legacy of the liberation of Eritrea would not continue in their favor. Younger Eritreans made the generation of their parents responsible for the emergence of the authoritarian regime and its continued existence – they feel increasingly helpless. but in workshops also focused on issues such as integration and causes of flight. Originally, the selection of a government in exile on the agenda for the meeting in Hochspeyer. Participants have, however, decided in a vote on the other hand, it was called then. ”We want to leave the political parties, the political work,” explains Ghebregergis of PZ on Sunday.

In the next six months they will now meet at a different location to a second, even larger Congress.

Nice words do not help – increase pressure on Eritrea