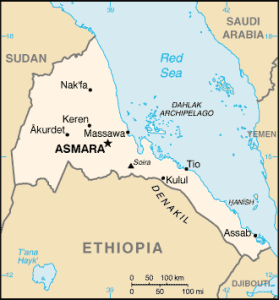 The newspaper The Ethiopian Herald reported that Asmara made it a requirement an old dispute, already resolved through the Algiers Agreement, but in the opinion of specialists, the Eritrean government still uses in order to get some revenue.

After two years of bloody conflicts in the horn of Africa, Ethiopia and Eritrea finally signed in 2000 a global peace agreement in the capital of Algeria.

The pact compromised the belligerents to accept the mediation of the United Nations for the establishment of their final borders according to the principle established by the then Organization of African Unity respecting the border limits inherited from the colonial era.

However, Eritrea still insists that the border area of the Ethiopian northwest, in the region of Yirga, is an integral part of its territory, which repeatedly and repeatedly obstructs the calls for understanding of Addis Ababa, said Belete Belachew, an analyst at the Center of Dialogue, Research and Cooperation.

’It is not Algiers that is hindering possible peace talks; it is rather the tendency of Asmara to use its conflicts with Ethiopia to obtain political gains. Consequently, it closes the hopes of reconciliation. ’

In his view, unfortunately, the Eritrean authorities are manipulating the border conflict to stifle domestic political dissidents and generate other socio-economic challenges.

The Algiers Agreement applies to both countries; one cannot fulfill it while the other side is violating it; Eritrea cannot insist on the implementation of one component of the agreement while violating its other component, said the Deputy Executive Director of the Institute of Strategic Studies of Foreign Affairs of Ethiopia, Mogos Tekelemichael.

In turn, Tafese Olika, an academic of Political Science at the University of Addis Ababa, pointed out that there are many more opportunities for both countries to use to renew their friendship.

Algiers could have been a point of discussion, but the other aspects of the relationship between people are more than enough to restore ties, Olika said.

The situation of ’no peace or war’ is not advantageous for Ethiopia, particularly for its people who live along the border between the two countries, experts said.

They agree that the relationship is more than a border issue and therefore, the two nations need to resort to other opportunities, among them the enormous cultural ties, to get out of the deadlock. 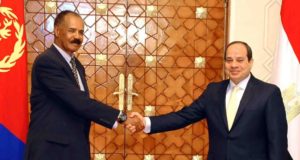 Egypt ’to build naval base on Eritrea’s Nora island’

ልዋም ንባብ! - maj 2, 2017
0
Egypt will open a massive new naval base in Eritrea, after the two countries reportedly signed secret agreements, members of the Eritrean opposition have...