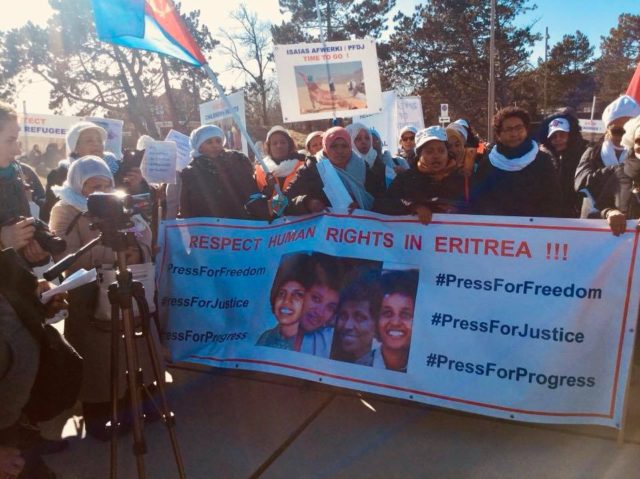 On the occasion of International Women’s Day, Eritrean women residing in 10 different countries in Europe convened on 8-10th of March in The Hague, the Netherlands for a march from Central Station to the International Criminal Court (ICC) under the banner of “Respect Human Rights in Eritrea”, followed by a two day conference of historical importance and magnitude discussing the current situation of Eritrea in general, and in particular situation of women at home, along migration routes and in the diaspora.

The March and conference celebrated and reflected Eritrea’s diversity with representatives from several women’s organisations that included the youth, veteran freedom fighters, professionals and activists. Some of the accomplishments of the event were the following:

1. A march against the gross human rights abuses in Eritrea in general and in particular its impact on Eritrean women and called for a constitutional governance and rule of law in Eritrea.

2. An appeal addressed to the International Criminal Court ( ICC) calling to hold the Eritrean regime accountable for committing gross human rights violations, as reported by the UN Human Rights council.

3. A two-day conference primarily discussing issues on how to empower women so that they effectively contribute their due share for a better outcome, by enhancing their role in the on-going struggle for political, social & economical change in Eritrea to play role in re-establishing peace, stability and the rule of law; and

4. Appointed a coordinating committee to overlook and strengthen the collaborative work locally as well as across the region, enhance participation and raise capacity of women.

The Conference provided an opportunity for participants to know one another and to exchange experiences and social challenges that women face in Eritrea and refugee camps including all forms of gender based violence.

Concerned with the ever-worsening vulnerable situation of the Eritrean people, the Conference dedicated substantial time for discussions on the deteriorating state of the nation and concluded by underlining the fact that all opposition groups and the women’s organisations have to come together to campaign and bring about a lasting solution to the current dire situation in Eritrea.

The conference has strengthened Eritrean women’s solidarity in Europe and across the globe.

Finally, we would like to thank all organisations and individuals who supported us financially and morally including all platforms of Eritrean media in the diaspora. Your assistance has enabled us to take our initiative further to the next level.

Betreff: WG: Demonstration & Conference at The Hague, at the ICC Netherlands- March 8,2018

Demonstration & Conference at The Hague, at the ICC Netherlands- March 8,2018

The Eritrean Fighter Women’s Movement Europe should politicize women and win for the revolutionary struggle! Why did not you resist it? Why did you let it all down? how could it get so far? Questions that our generation will have to hear until the end of their lives, and which will probably be asked for a few more decades by the Eritreans. One must have lived in the time of Eritrea’s independence to understand the answers to these questions!

The trusted women continued to work and met regularly from 8 March 2018 to open women’s conferences, which brought together all activists and the nationwide exchange served. In everyday family life, too, demands for emancipation and equality were mostly met with incomprehension and rejection.

The women’s movement comprises associations and initiatives whose members are united in more or less firm forms of organization and publicly advocate their equal rights in the political, economic, cultural and social fields.

Even in every day family life demands emancipation and equal rights found no sympathy mostly refused.

Demonstration & Conference at the Hague,at the ICC Netherlands

The Blue Flag ”Khedra”, as it is passionately referred to in Tigre and ”Awli’e” in Tigrinya, became the symbol of the then Eritrean state (1952-1962). The Eritrean flag was discussed, voted on and adopted by all 68 founding members of the Eritrean Council, who had a 6-month mandate to prepare the first Eritrean Constitution!

Colors are illusion, I think colored! The Eritrean Blue flag is the only color that makes me feel good and very peaceful! This color of the Historic Flag of Eritrea, it has a light blue background with a green wreath in the center.