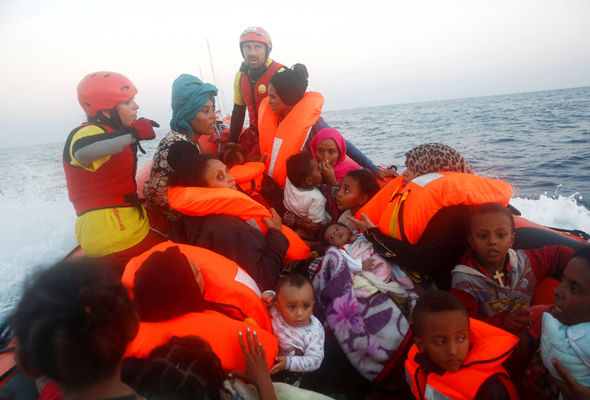 AROUND 1,100 migrants were rescued off the coast of Italy as they attempted to make the dangerous sea crossing in a day of rescue operations.

The Italian Coastguard was sent on more than 11 separate rescue missions in the Strait of Sicily on Sunday.

Migrants attempted to make the crossing in rubber boats, a barge and two punts.

The Coastguard used Dattilo patrol ships to save around 600 people crammed onto five rubber boats.

Italian Navy ships were drafted in to save hundreds more from another three rubber boats and a barge.

Another seven migrants were rescued from a small boat by the Coastguard.

The operation came just one day after hundreds of migrants were rescued from an overcrowded dingy and wooden boat off the coast of Libya.

Migrants from Eritrea crammed onto the overcrowded wooden vessel during a rescue operation by the Spanish NGO Proactiva, off the Libyan coast in Mediterranean Sea on Saturday.

The rescues mark another busy day for the Italian Coastguard who have rescued thousands over migrants from the sea over the past year.

It’s unclear what country the migrants had set sail from but migration experts expect the Libya-Italy route to be used more often following the EU-Turkey deal, which makes it harder for migrants to reach Europe through the Balkans.

The route was abandoned when it became easier to reach Europe via Greece.

The number of migrants arriving in Italy by sea has fallen by 9 per cent this year, to 37,743, according to the Interior Ministry.

Boat arrivals have risen as people smugglers attempt the crossing from Libya to make the most of warm weather and calm seas.

The number of migrants has caused political friction, with some right-wing parties lambasting the government for not doing more to stop the crisis.

Many migrants pay traffickers to travel on unseaworthy rubber boats to Sicily.

Thousands of migrants have died trying to make the crossing.