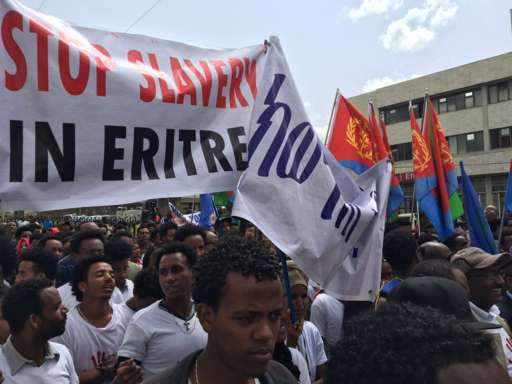 Hundreds of Eritrean refugees living in Ethiopia are demonstrating in the capital, Addis Ababa, in support of the UN’s recent human rights report into Eritrea, known as the Commission of Inquiry, that said there were systematic crimes against humanity.

”It is not law that rules Eritreans – but fear,” the report said, which details allegations of extrajudicial killings, sexual slavery and enforced labour.

The government described the report as ”politically motivated and groundless”.

The protesters are carrying banners calling for Eritrean President Isaias Afwerki to be taken to the International Criminal Court.

They have also presented a petition to the African Union asking it to push for the full implementation of the report.

Protests are also taking place in northern Ethiopia where thousands of people who fled Eritrea over the years are now living as refugees.

Earlier this week, pro-government Eritreans protested against the UN report in Geneva, where it was being discussed. 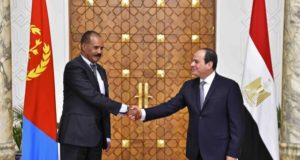 ልዋም ንባብ! - jan 11, 2018
0
CAIRO — Egypt’s president and his Eritrean counterpart met in Cairo on Monday amid heightened tensions with Sudan and Ethiopia over border disputes and...