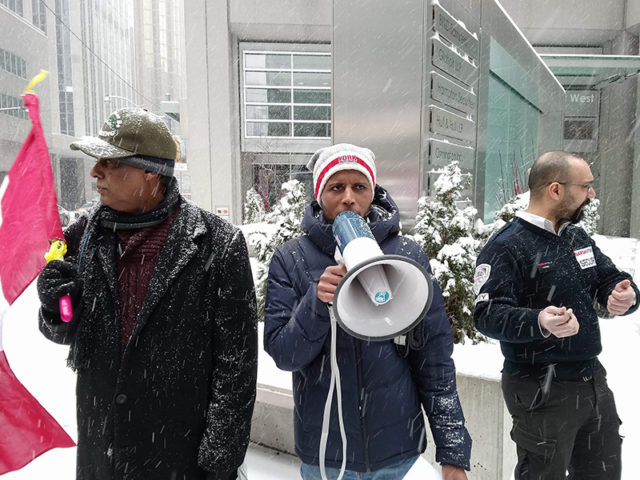 It didn’t exactly rain on Dawit Demoz’s parade, but it did snow on his rally. The cold weather, snow and the resulting traffic jams substantially cut into the number of people who showed up to a rally for African asylum seekers on Feb. 7 in Toronto.

The protest was supposed to take place in front of the Rwandan consulate in downtown Toronto, but organizers were unaware that it had apparently moved, leaving about 40 people, divided more or less equally between members of the Eritrean and Jewish communities, to rally in front of an office building.

They held posters and attempted to engage passersby in conversation about the fate that awaits 38,000 African asylum seekers in Israel, whom the government is pushing to leave the country.

The protest was part of a much larger, coordinated event held at Rwandan diplomatic facilities around the world, in order to highlight the fate of African asylum seekers living in Israel who have been deported to Rwanda.

In Herzliya, Israel, some 3,000 people, including Holocaust survivors, gathered in front of the Rwandan embassy in the largest such event. Other protests were held in New York, Geneva and elsewhere, Demoz said.

The protesters, including those in Toronto, called on the Rwandan government to pull out of an agreement with Israel, which has seen it accept Eritrean and Sudanese refugees who are being pushed out of Israel. In the last few years, about 4,000 asylum seekers have been deported to Rwanda, but their fate is far from certain, Demoz said.

The protesters are also calling on Rwanda to ensure that those who do enter that country from Israel remain safe. “We want Rwanda to show us the deal and to assure us it will protect them,” Demoz said.

The international rallies are part of a concerted effort in recent months to oppose the Israeli policy of deporting an estimated 38,000 Africans who fled to Israel from Eritrea and Sudan. Israel has labelled them as “infiltrators” and claimed that they are economic migrants. Their supporters say they are refugees fleeing persecution and that Israel should put in place a mechanism to determine their legal status on a case-by-case basis.

For its part, Israel is offering the asylum seekers US$3,500 ($4,400), plus a ticket to Rwanda. Those who decline the offer will be placed in holding camps.

Friends and relatives of the deportees who were sent to Rwanda have been told that, upon their arrival, some have had their travel documents taken, leaving them with no obvious legal right to remain in the country. Some have moved on to Ethiopia, others to Libya, where many have fallen victim to human trafficking and the slave trade, while others have managed to flee to Europe.

Israel should permit African asylum-seekers to remain, Dewoz said. Rwanda has already taken in more than one million refugees, while only 38,000 reside in Israel. “Israel has more capacity than Rwanda,” he said.

Meanwhile, Demoz cited news reports in Israel, which say that the country is planning to bring 6,000 migrant workers in from the Philippines, “even though there are 38,000 (Africans) who are in Israel now, who know the language and can contribute to Israeli society,” Demoz said.

Demoz, a native of Eritrea who lived in Israel before immigrating to Canada, called on people in the Jewish community to join together to privately sponsor Africans living in Israel to come to Canada as refugees. 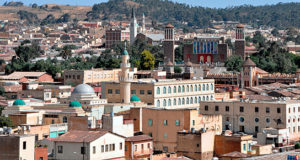 ልዋም ንባብ! - jul 9, 2017
0
WARSAW, Poland –  Eritrean officials say the decision by the U.N. cultural agency to put the African nation's capital city of Asmara on the...