GENEVA, June 8 (Reuters) – U.N. human rights investigators accused Eritrean leaders on Wednesday of crimes against humanity including torture, rape, murder and enslaving hundreds of thousands of people and called for the case to be referred to the International Criminal Court.

Atrocities had been committed since the country’s independence in 1991 and were continuing, the U.N. Commission of Inquiry said in a report that was immediately rejected by the government.

”Particular individuals, including officials at the highest levels of State, the ruling party – the People’s Front for Democracy and Justice – and commanding officers bear responsibility for crimes against humanity and other gross human rights violations,” the report said.

”We probably think there’s 300,000-400,000 people who have been enslaved,” Mike Smith, the Australian diplomat leading the inquiry, told a news conference, referring to people drafted into military service and sent away for years to remote areas.

Eritrea’s poor treatment of its own people has motivated many thousands to flee the country, according to the U.N. refugee agency. Smith said he believed the country still had a ”shoot-to-kill” policy on the borders to stop them. However, it seemed the policy was not being rigorously enforced, he said.

The inquiry has compiled files on key suspects to assist future prosecutions, but Smith declined to give details or to say if President Isaias Afwerki was among them.

Presidential Adviser Yemane Ghebreab said the report was biased and based on false evidence and failed to take into account Eritrea’s achievements and the ”continuing state of war” with neighbouring Ethiopia.

The central accusation of crimes against humanity was ”laughable”, he said, and compared the shoot-to-kill allegation to the claims of Iraqi weapons of mass destruction that preceded the 2003 U.S. invasion of Iraq, which later proved false.

Eritrea was a ”low crime society” with only one or two rapes a year in a population of almost 4 million, he said. ”Crimes in general are very rare in Eritrea. Anyone who has been to Eritrea will tell you that this is the case.”

The report said visitors should not be fooled by the ”general sense of calm and order” in the capital Asmara, because abuses were carried out in military training camps and detention centres.

”The facade of calm and normality that is apparent to the occasional visitor to the country, and others confined to sections of the capital, belies the consistent patterns of serious human rights violations,” it added.

Eritrea’s government did not allow the inquiry team to visit the country, although its diplomats met the investigators at the U.N. headquarters in New York and in Geneva.

The inquiry said there had been no improvement since a year ago when it published a 484-page dossier describing extrajudicial killings, widespread torture, sexual slavery and enforced labour. At the time it did not have a mandate to recommend referral to the ICC.

The U.N. Human Rights Council will debate the report on June 21, and Eritrea will be the subject of a resolution brought by other African countries. Diplomats say Eritrea lacks allies who will defend it.

”It’s early days at the Human Rights Council,” Yemane said. ”The mood is much different now and people are much more aware.” (Reporting by Tom Miles; Editing by Andrew Heavens and Toby Chopra)

A SALUTE TO ERITREAN VETERANS 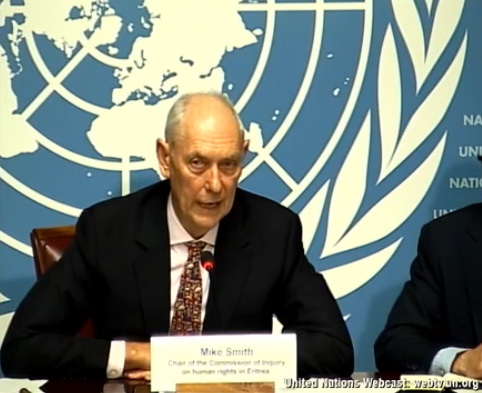