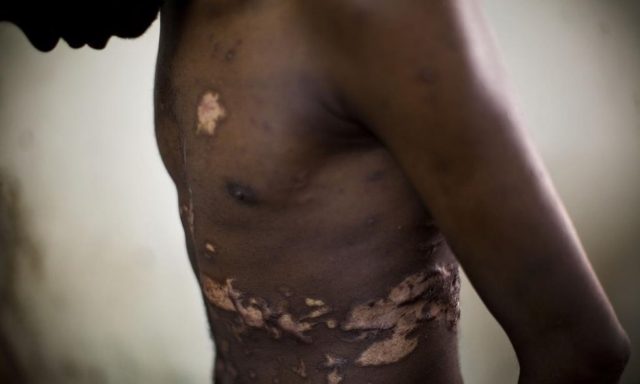 The Eritrean regime is deeply involved in the brutal trade in refugees from his country, according to a new book. Some victims are subjected to torture, sexual violence, murders and their relatives and friends for the extortion of ransoms.

– We are sure that there are links to the regime, says Meron Estefanos, Swedish-Eritrean journalist and human rights activist, said.

After five years of field work by various experts released this book, edited by Mirjam van Reisen, Professor at the University of Leiden in the Netherlands and Professor Munyaradzi Mawere at the Great Zimbabwe University. During the work, including cash flows followed and interviewed approximately 200 victims – including Estefanos.

Eritrea is one of the world’s worst repressive and controlled with an iron hand by President Isaias Afwerki.

The experts have identified five Eritrean men behind the cruel trade in the often young refugees by Sudan, Ethiopia, Egypt and Libya. According to the book trade can be directly linked to the Eritrean government officials and military personnel, in collaboration with criminal gangs. Payment of ransoms – through digital payment systems – linked to the Eritrean capital Asmara or persons abroad that are considered connected there.

– The corrupt Eritrean regime has always turned a blind eye when their staff make various criminal things, as long as they are not a threat to the regime’s power. The more corrupt they are, the safer the incumbent president. It is also a way to make money, says Estefanos.

TT: But it’s also a way to get rid of the opposition?

– Yes absolutely. There are those who leave the country – those who are dissatisfied with the system.
During the trips north subjected the defenseless victims often horribly cruel treatment. They robbed, beaten, subjected to sexual violence and murder. In addition, many hostage and gang members call friends and family and demanding money while they have to listen to the loved ones screaming in horrendous torture. It is clear that this happened several relatives in Sweden.

Estefanos believes that the EU and Sweden blind eye to the continuing repression by the regime exposes refugees through its embassies around Europe. She believes that Sweden is extra careful because of the Swedish-Eritrean journalist Dawit Isaak imprisoned in Eritrea in 2001, and whose fate is unknown.

– It is frustrating. We want home Dawit Isaak, but at the same time, it should not cost me my rights.

Despite early promises of democracy at independence from Ethiopia in 1993, Eritrea is a one-party state, ruled by a dictator, President Isaias Afwerki. He is the former leader of the largest relief group EPLF (now reorganized as the only authorized party PFDJ).

No political opposition is allowed and no national elections have been held since independence. The Constitution has never been introduced. Press freedom is the worst in the world, according to Reporters Without Borders. The country is so closed that it is often likened to North Korea.

Together with its allies control Isaias Afwerki of autocratic politics, economy and justice. Since 2001 there is in reality a state of emergency.
In September 2001, was arrested on Swedish-Eritrean journalist Dawit Isaak in Eritrea. It is unclear whether he is still alive.

There are many experts behind the book ”Human trafficking and trauma in the digital age. The ongoing tragedy of trafficking of refugees from Eritrea.”
The experts are Professor Mirjam van Reisen at the University of Leiden in the Netherlands, Professor Munyaradzi Mawere at the Great Zimbabwe University, Swedish-Eritrean journalist and Eritrea expert Meron Estefanos, Eritrean human rights lawyer Daniel Mekonnen, South African journalist and expert Martin Plaut and Eritrean human rights activist Selam Kidan.

While working on the book has about 200 interviews were conducted.
Source: author

Dawit’s daughter does not lose hope

ልዋም ንባብ! - aug 7, 2017
0
Christian Solidarity Worldwide (CSW) has voiced concern that the legitimate patriarch of the Eritrean Orthodox Church, Abune Antonios, has not been seen in public...