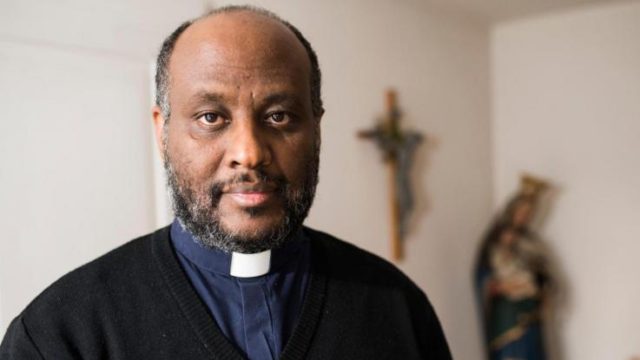 President Trump closes US borders, Theresa May wants the wall of Calais and France has strengthened its position on the border of Ventimiglia. Don Mussie Zerai, an Eritrean priest, founder and president of the agency Habescia, nominated for the Nobel Peace Prize in 2015, and co-author with Giuseppe Carrisi of ’Father Moses. In the journey of despair his phone number is the last hope ’, he told LaPresse as’ gave voice to the voiceless’. Written in pen on t-shirts, engraved inside the holds, spread by word of mouth, sent via text message from one continent to another, that of Don Zerai, Father Moses, it is not a mobile number whatsoever. Cling to that phone number all who face the journey of hope on the boats: the many that go on so-called ships of shame, families who have no news of their loved ones, asylum seekers in Libyan camps, migrant camps refugees from Sudan. Often don Zerai that, after receiving a dramatic phone, alert the Navy or the Coast Guard because succor the boats in distress.

Father Zerai was born in Eritrea, Asmara, has fortuitously expatriate in Italy in 1992, just seventeen, as a political refugee, in the days when his country c’eraáil of Aferwerki regime. Motherless, who lost in five years, and seven brothers, decided to escape in our country when his father was arrested by the Eritrean secret police. And ’it arrived in Italy as a refugee, with a path, constantly recalling the institutions’ attention to the plight of sea massacres, led him to the nomination for the Nobel Peace Prize in 2015 and the entrance in the hundred most influential people the world in 2016, according to Time magazine. He denounced the silence of the countries of North Africa and sub-Saharan Africa. He accused without hesitation dictatorial regimes colluded in human trafficking.

We always talk about more restrictions to the flow of migrants and refugees, from Europe to the US. What will happen, what will be the consequences?

These are walls that will serve to nothing, if not for political propaganda. The consequence will be that there will be more risk for those who try to reach the United States or other countries in Europe, the ones where there are walls. Increase the cost of the trip and will be increasingly pushed into the hands of traffickers who prey on their desperation, the desperation of people who want to apply for asylum, reaching family, to save themselves from wars.

In an era of walls, extreme right and populism, the reception policy is still possible?

Yes, you can, in fact there is no alternative. It ’walls, it’ barbed wire or violent propaganda will prevent the arrival of those who flee persecution, hunger, conflict or climate change and looking for a safe place. These people physically are already here: we must welcome them in a dignified manner. Politicians of these rights, they want the walls and barbed wire, in the past have often already governed. They found themselves physically in front of these people and they had to respond by welcoming them. Close the doors and reject is not human to those who ask for protection. It just can result in just as he forced them to flee.

What we can do concretely to manage the phenomenon?

I have written to the European Commission to say that the goal is to make sure that these people can live in dignity and freely in their country. Remove the causes of flight: a long-term project, but to start immediately with economic pressures, political and legal instruments. Then we have to organize the protection in the countries closest to their home. Not build mega camps in tents in the desert, which means abandoning them; Instead we need to create jobs, scholarships, vocational training in those countries. For example in Uganda we are welcoming thousands of refugees and displaced persons without creating mega fields, but by placing them in the social context. It serves a co arrives directly to refugees and does not disappear in the streams of the powerful pockets. Serves the humanitarian corridor made with organizations selezionino those who really need international protection. To be refugees and migrants legally by plane, with $ 450 and not have to pay 5 thousand as today.

How came that first call from the boat, as he began his story of a priest who helps migrants? His book begins from Lampedusa …

In 1996 came the first phone call from people who knew me and knew that I was helping the refugees. When they received the first call for help they immediately turned to me. And I reported to the Coast Guard. After that tragedy, that is not enough remembered, then there was the one in 2003. Then the refugees, long kept in detention facilities run by Gaddafi, once out from there, they took the boats and, at 3 am, to May, they called me: screaming ’help, help’ and they were more than 300 in the barge. I remarked it to the Coast Guard.

What a feeling it when after a phone call like the one she comes to know that there was a wreck and there were dead?

Luckily I have contributed in recent years to save more than 150,000 lives. Rarely is it that those who have not called me could make it. On 14 January, however, unfortunately they called from a barge 14 people, but survived only 4. And ’devastating when it happens: just before you spoke with them and then are gone.

What are the first words that says those who call the sea to launch an SOS?

They shout ’Help us, we are dying’, men, women and children desperate scream. Items that can not leave indifferent the listener.

Time said that she is one of the 100 most influential people in the world? As found in this definition?

If it were real, I would have listened to everyone and I would get more results. But if this award will help me to listen well is

In 2006 he founded the non-profit agency ’Habeshia’, from the name of the zone between Eritrea and Ethiopia from which the refugees come from. What does Habeshia?

And ’the voice of the voiceless, denounces the violations of human rights and sensitizes institutions and public opinion and makes assistance: we have projects and scholarships for young people in particular in Africa, to enable them to have a better future at home their. We we interface with the European Commission and national and European parliamentarians of different political forces. we are not tied to a party: we appeal to all.

She would write a letter to President Trump? What would you say or would see or hear to change his mind on refugees and migrants?

I would write him and tell him that you do not need walls but bridges, provided it can hear my words. And I would tell him that Mexicans or people of South America that he wants to stop you have to entice them to stay in their countries, by removing the cause that moves them to the north, that is, poverty and injustice and exploitation. Making the walls is picking on the weaker, rather than protect them. You have to pick on those who forced them to flee. The wall Trump do it against the powerful who take advantage, not against the most desperate and poor. Trump should go personally to the border with Mexico, to see the crosses of those who died or to meet family members of those who do not l ’has done and who hopes to make it to the border between Mexico and the US. If you do not know the personal stories, from a distance, with a certain coldness you can make certain decisions. But listen directly to a person in the flesh and ’different.
I did listen to those voices several times, I gave the persecuted in Libya video, both to the Commissioner for Human Rights of the EU and to other commissioners, who noticed what was going on in Libya. And after hearing them we were right in what they denounced.

African migrant says, in Israel, ”they force you to deport yourself” 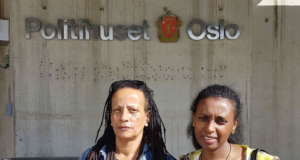 ልዋም ንባብ! - maj 16, 2017
0
There is fresh pressure on the Norwegian authorities to halt illegal tax collection by the Eritrean government from members of the exile community. Norway closed...