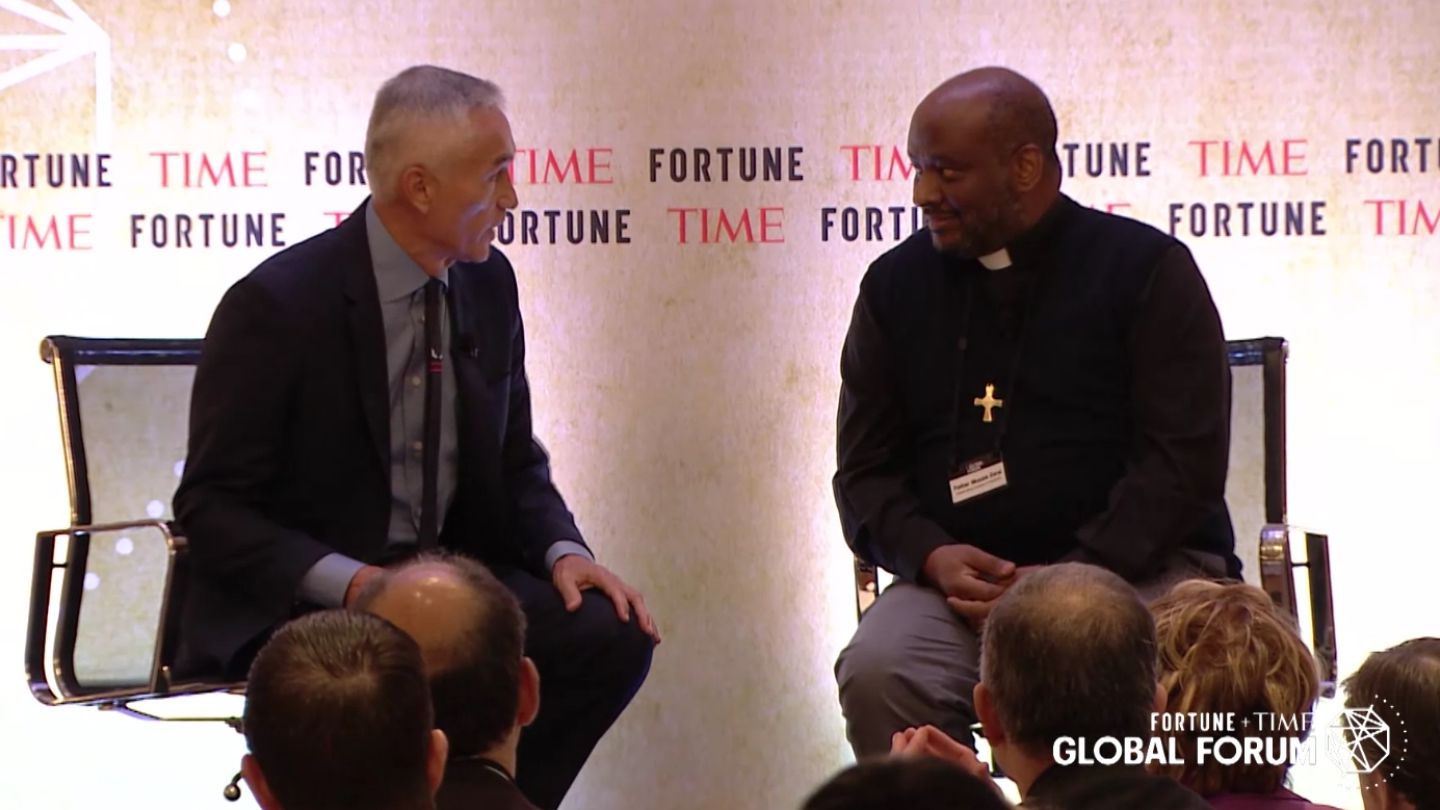 One person with a cellphone can save so many lives.This year, more than 4,650 people fleeing from Africa to Europe have perished on the Mediterranean Sea, according to the International Organization for Migration—about 1,000 more than last year. The Mediterranean is the deadliest crossing in the world, and the situation doesn’t seem to be improving.

The boats overloaded with desperate people usually embark from points in Libya, Tunisia and Algeria, heading to Italy or Greece. One-fourth of those on board are fleeing from Syria; the rest come from Afghanistan, Iraq, Sudan, Nigeria, Eritrea, or other nations in Africa and the Middle East. Most are men (55%), but 27% are children.

Almost every day in warmer months come reports of capsized boats and multiple drownings. Some vessels are simply lost at sea. Others run out of fuel and begin to drift aimlessly. That’s when Father Mussie Zerai gets a call.

Zerai is a Catholic priest who fled Eritrea’s military regime as a teenager and now divides his time between Italy and Switzerland. In 2003, Zerai gave his phone number to a journalist who was visiting a group of refugees from Eritrea and Ethiopia at a detention center in Libya. There, the journalist gave Zerai’s phone number to the refugees, and it eventually ended up on a wall in the detention center with a message: “In case of emergency, call this number.”Emergencies occur often. When Zerai gets a call, he writes down all he can about the boat — especially how many people are aboard. Then he tries to get the coordinates of the satellite phone being used by the passengers and relays that information to the Italian Coast Guard and other rescue organizations. Hundreds, even thousands, of lives have been saved.

This year alone, more than 345,000 refugees have arrived in Europe, a steady influx that doesn’t seem to be slowing. Sustained conflict in Iraq, Afghanistan, Libya and Syria—combined with the poverty and chaos in authoritarian regimes in Africa — virtually assure that hundreds of thousands of people will keep trying to escape. For Europe and other destinations, the overwhelming challenge remains: What to do with all these people?

Zerai has an answer: Help in any way you can. “The alternative is to fight human trafficking,” he told me in a recent interview, “and, at the same time, to have legal immigration.” Zerai advocates for the creation of a humanitarian corridor, including settlement programs and special visas. He also calls for bilateral agreements among countries that aim to expel people and those willing to take them in.But the current political environment in Europe doesn’t support these kinds of solutions.

As is the case in the United States, anti-immigrant sentiments have spread across Western Europe. And while Germany took in more than a million refugees in 2015, other countries have opted to try and shut their doors. Like Donald Trump in the U.S., some European leaders are proposing to build walls or imprison outsiders who cross the border without permission.But Zerai says such strategies are deeply counterproductive. “More restrictive [immigration] policy in Europe, more business for human trafficking,” he told me.Zerai estimates that traffickers earn over $1 billion a year smuggling people from Africa to Europe. Organ traffickers target them, and criminal gangs sell women into sexual exploitation.

For many Europeans, it’s easy to criticize the outsiders, however treacherous their passage. But, as Zerai points out, these people are only looking for an opportunity for themselves and their children to lead dignified lives. That starts with simply being able to survive in another country.

The pressure isn’t easing anytime soon. Once the winter is over and warmer weather arrives, we’ll hear about more tragedies on the Mediterranean. What we won’t hear about is the lives that were saved thanks to a phone call to Father Zerai. That’s why they call him the “angel of the seas.”

The video of my interview with Father Zerai can be viewed here.

Jorge Ramos, an Emmy Award-winning journalist, is a news anchor on Univision and the host of “America With Jorge Ramos” on Fusion. Originally from Mexico and now based in Florida, Ramos is the author of several best-selling books. His latest is “Take a Stand: Lessons From Rebels.”

UN calls on African Union to respond to Eritrea violations

ልዋም ንባብ! - jul 4, 2016
0
The United Nations rights council has called on the African Union to investigate Eritrean leaders over alleged crimes against humanity after a damning report...