The photographer and journalist Goran Assbring killed in a night-time ambush in Eritrea during a reporting trip in autumn 1983. He knew that the area was dangerous, several guerrilla factions fighting against Ethiopia’s Mengistu and against each other. But Assbring, like many other dedicated freelance journalists, felt the need to take risks in order to spread the truth about the world’s liberation movements. At home waiting Ingela wife, son Charlie, 8, and two six-month twin girls.

The others in the car, five resistance fighters in the eventually victorious Marxist EPLF (Eritrean People’s Liberation Front) fared. Information about the injured differ greatly. But many of them now have high positions in President Isaias Afewerkis party state, where, among other Swedish-Eritrean journalist Dawid Isaak imprisoned without trial since 2001.

In the photo + text-book Father, the Son and Goran (Documents Press) tells his son Kalle Assbring the dull missing during childhood and how he as an adult also training to be a photographer and traveling to Eritrea several times to try to understand his father and his destiny.

In Eritrea, he will be well received, visit the memorial of concrete at the grave, must shake hands with Afewerki and interview the four of them went in the car when it came under fire near a river crossing in the highlands. The son discovers that the father is seen as a hero, the first foreigner who ”gave his life for the struggle.” He learns that there are several young men in Eritrea, according gerillased named Yoran el Yuran after the fallen Goran. He decides to look up so many Yuran he can.

None of them look particularly happy. Some of them are on the run from the dictatorship, many Eritreans today. Much remains obscure about what happened that night in 1983. Goran had wanted to see the sky and changed positions so he came closest to the door when the bullets came. The shot from the bushes may have known they were going.

Kalle Assbrings book is personal, unpretentious and recognizes both his vanity groping and the pain that lies in the search for answers that are not there. 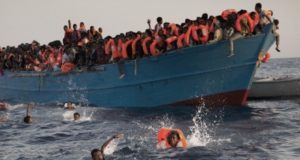